Ask yourself. Do you throw like a girl?
About the author:

What is this essay about?  This essay recalls the beginning of the baseball season in 1994. As always, President Clinton opened the game throwing the first pitch. At the same time, Mrs Clinton throws the first pitch in a Boston stadium; she was the first lady to do this, as the video shows.

Fallows paid special attention to the pictures that came out in every newspaper the next day. The way Mrs. Hilary Clinton did the first pitch is what people called “throwing like a girl” (her position giving the front of her body). He describes that this phrase has become offensive against women.

“Having been trained (like most American boys) to dread the accusation of doing anything "like a girl," athletes were said to grow into the assumption that women were valueless, and natural prey”.

Although the subject might seem funny, the article is really about issues of gender inequality and stereotypes, and these issues are treated in a fairly serious way.  Fallows clearly think this is a serious issue and includes scientific facts, historical facts, and quotations from experts to demonstrate his points.

His purpose: He said he this issue called his attention because he thought of his wife, learning how to throw and catch to play with him in the future, but also because he has felt that kind discrimination and stereotypes about groups in which he is included.
What kind of essay is this one: It is an argumentative essay and it has elements on compare and contrast.
James Fallow states: Both genders are equal

1. There is no structural reason why men and women should throw in different ways.

2. Setting up a position of our bodies can determine how we are going to throw, women or men as equal.

3. The crucial factor is not that males and females are put together differently but that they typically spend their early years in different ways.

4. All these activities, such as ride a bike, stake, throw, all that is required for developing any of these motor skills is time for practice. 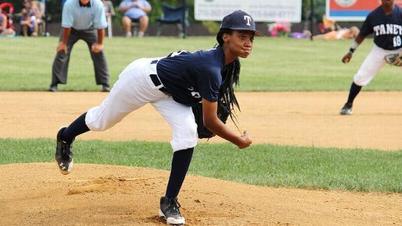 What do we think?


We are most likely to develop skills for activities that our environment (family, friends, school, church) encourage us to do. It is like boys don’t play with dolls, and girl don’t play with cars or trucks. That is not a ¨must¨ that is just the idea with which we have been raised. But after we grow up, we develop our character and personality that made us different and unique. So yes, we girls can learn to throw as athletes do.
Do you want to learn how to throw?

James Fallow give these advices:

1. Lay catch with a partner who is ten or fifteen feet away--but do so while squatting with the knee of your throwing side touching the ground. When you start out this low, you have to keep the throw high to get the ball to your partner without bouncing it. This encourages a throw with the elbow held well above the shoulder, where it belongs.

2. Play catch with a person who can throw like an athlete but is using his or her off hand. Forcing a right-handed man to throw left-handed is the great equalizer. There for, he/she can no longer be condescending.